The Toyota JZ engine family comprises the 1JZ and 2JZ series of inline-6 automobile engines. A replacement for the M-series inline-6 engines, the JZ engines were 24-valve DOHC engines. The JZ engine was offered in 2.5- and 3.0-litre versions. 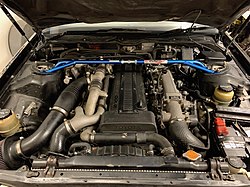 The early generation 1JZ-GTEs combined the inherent smoothness of an inline 6-cylinder engine with the revving capacity of its short stroke and early power delivery of its small, ceramic wheeled turbochargers. The ceramic turbine wheels are prone to delamination in the setting of high impeller rpm and local temperature conditions, usually a result of higher boost. The first generation 1JZs were even more prone to turbo failure due to there being a faulty one-way valve on the head, specifically on the intake cam cover causing blow-by gases to go into the intake manifold. On the exhaust side, a decent amount of oil vapor flows into the turbos causing premature wear on the seals. The later second generation engines had this problem fixed and in Japan there was actually a recall in order to repair the first generation engines, though that does not apply to 1JZs imported to other countries. The fix is simple, and involves replacement of the PCV valve (2JZ); all parts are available through Toyota.

The third generation of the 1JZ-GTE was introduced around 1996, still as a 2.5-litre turbo, but with Toyota’s BEAMS architecture. [2] This included a reworked head, newly developed continuously variable valve timing mechanism (VVT-i), modified water jackets for improved cylinder cooling and newly developed shims with a titanium nitride coating for reduced cam friction. [3] The turbo setup changed from parallel twin turbo (CT12A x2) to a single turbo (CT15B). The single turbo is in part made more efficient by the use of smaller exhaust ports in the head, this allows the escaping exhaust gasses to have more velocity as they exit the head, which in turn, spools the turbo faster and at lower RPM.The adoption of VVT-i and the improved cylinder cooling allowed the compression ratio to be increased from 8.5:1 to 9.0:1. Even though the official power figures remained at 280 PS (206 kW; 276 hp) at 6200 rpm, torque was increased by 20 N⋅m (15 lbf⋅ft) to 379 N⋅m (280 lbf⋅ft) at 2400 rpm. These improvements resulted in increased engine efficiency that reduced fuel consumption by 10%. The adoption of a much higher efficiency single turbocharger than the twins as well as different manifold and exhaust ports were responsible for most of the 50% torque increase at low engine speeds. This engine was used primarily in Toyota’s X chassis cars (Chaser, Mark II, Cresta, Verossa), the Crown Athlete V (JZS170) and in the later JZZ30 Soarer, as the JZA70 Supra was long discontinued by this time.

In around 2000, Toyota introduced what are probably the least recognised members of the JZ engine family – the FSE direct injection variants. These FSE 1JZ and 2JZ engines are aimed at achieving minimal emissions and fuel consumption together with no loss of performance.

The 2.5-litre 1JZ-FSE employs the same block as the conventional 1JZ-GE; however, the design of the cylinder head is unique. The ‘D4’ FSE employs a relatively narrow angle cylinder head with swirl control valves that serve to improve combustion efficiency. This is necessary to run at extremely lean air-fuel ratios around 20 to 40:1 at certain engine load and revs. Not surprisingly, fuel consumption is reduced by around 20 percent (when tested in the Japanese 10/15 urban mode).

Normal unleaded fuel is enough to cope with the FSE’s 11:1 compression ratio.

It uses Sequential Electronic Fuel Injection, has an aluminum head and 4 valves per cylinder, along with a cast-iron cylinder block, with some versions using VVT-i. The VVT-i version also featured DIS in favor of the traditional distributor set-up previously seen on the 1JZ-GE. Despite the common misconception, it was not a true COP (Coil-On-Plug, also known as Plug-top coil) ignition system instead relying on one coil to fire two cylinders, one of which was by spark plug wire.

The 2JZ-GTE is an inline-layout, six-cylinder, belt-driven dual overhead camshaft, air-intercooled, twin-turbocharged, cast-iron block, aluminium cylinder headed engine designed and manufactured by Toyota Motor Corporation that was produced from 1991 until 2002 in Japan. Development and evolution of the engine was, principally, a response to Nissan’s relatively new and then-successful RB26DETT engine [ citation needed ] which had achieved palpable success in FIA Group A and Group N touring car championships.

For all road car applications, two gearboxes were available for the engine:

The 2JZ-GTE originally powered the Toyota Aristo V (JZS147) in 1991 before becoming Toyota’s flagship performance engine in the Toyota Supra RZ (JZA80). Its mechanical basis was the existing 2JZ-GE, but differed in its use of sequential twin turbochargers and an air-to-air side-mounted intercooler. The engine block, crankshaft, and connecting rods of the Supra’s 2JZ-GE and 2JZ-GTE are the same, with notable differences being that the 2JZ-GTE has recessed piston tops (giving a lower compression ratio), oil spray nozzles to aid in cooling the pistons and a different head (redesigned inlet/exhaust ports, cams and valves). Toyota’s VVT-i variable valve timing technology was added to the engine beginning in September 1997, hence it phased out the original engine. Consequently, maximum torque and horsepower was raised for engines selling in all markets. These later 2JZ-GE VVT-i equipped models (Aristo, Altezza and Mark II) share a different part number for weaker connecting rods.

The addition of twin turbochargers, jointly developed by Toyota with Hitachi, in sequential configuration had raised its commercially cited output from 230 PS (169 kW; 227 hp) to the contemporary industry maximum of 280 PS (206 kW; 276 hp) at 5600 rpm. In its first appearance, torque was advertised as 44.3 kg⋅m (320 lb⋅ft; 434 N⋅m) at 4000 rpm to be later recited as 46 kg⋅m (333 lb⋅ft; 451 N⋅m) with the introduction VVT-i in production year 1997. The mutually agreed, industry-wide output ceiling was enforced by Japan’s now-defunct Gentlemen’s Agreement exclusively between Japanese automakers selling to the Japanese domestic market. Engine power in the North American and European markets, as documented by Toyota, was increased to 320 hp (239 kW; 324 PS) at 5600 rpm. [4]

The export version of the 2JZ-GTE achieved its higher power output with the use of newer stainless steel turbochargers (ceramic for Japanese models), revised camshafts, and larger injectors (550 cc/min for export, 440 cc/min for Japanese). The mechanical similarities between the Japanese-specification CT20 turbine and export-specification CT12B turbine allow interchangeability of the exhaust-side propeller shaft. Additionally, the export-exclusive CT12B turbine received more durable turbine housings and stainless steel turbine and impeller fins. Multiple variants of the Japanese CT20 turbine exist discretely, which are identified with the B, R, and A part number suffixes (e.g.: CT20A).

Inspired by the initial Fast and Furious film, and videogames like Need for Speed: Underground, tuners found that Toyota’s 2JZ engines are remarkably easy to upgrade. The block will easily handle modifications that double or even triple the original power output. [5] 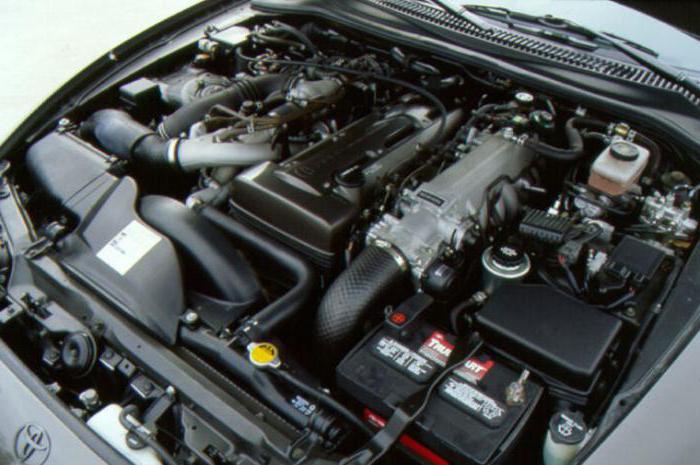 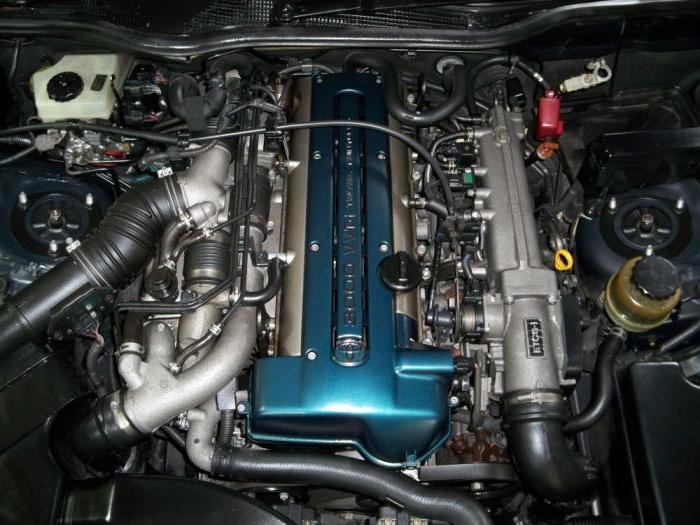 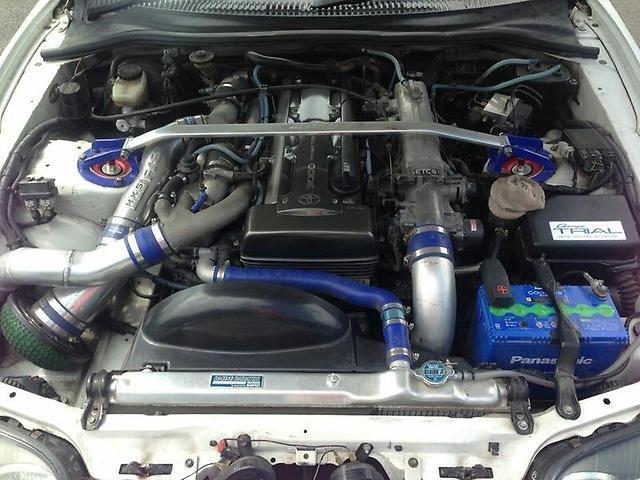 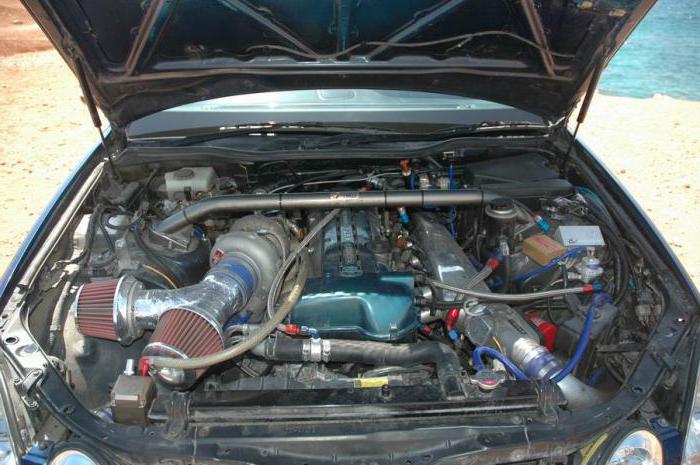 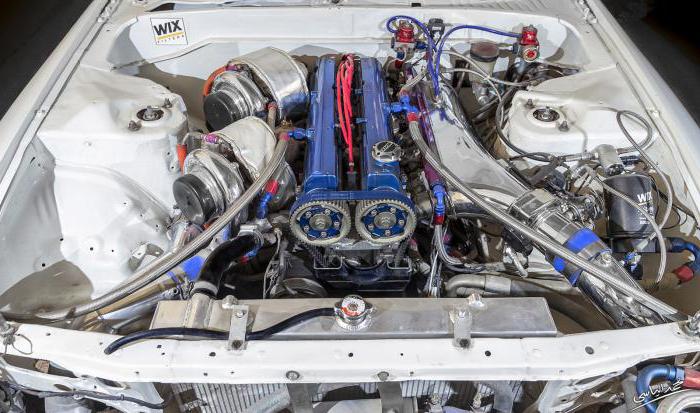